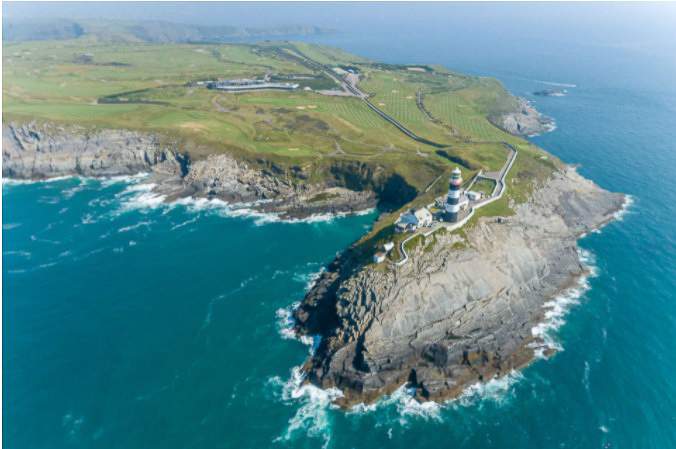 Drone picture of the Old Head Kinsale while on site doing a shoot, we had all permissions in place plus permission from Irish Lights.

The Old Head has hosted "lighthouses" for millennia, with references to a beacon of light being maintained on the headland dating back to pre-Christian Ireland.[4] On 13 November 1665 Charles II granted letters patent to Sir Robert Reading to construct six lighthouses around the coast of Ireland. One of these was established on the Old Head of Kinsale,[1] and constituted the first lighthouse on the peninsula as would be recognised as such today.[4] The lighthouse constituted a brazier on the roof of a cottage. There had been earlier beacons, but this was the first proper building which is still extant.[1] Some time after 1683 the light was discontinued, and a petition presented to the House of Commons for its reinstatement.[1]

In 1804 the Revenue Commissioners replaced the brazier with a temporary 1.8 metres (5.9 ft) lantern lit by oil lamps. Eight years later it was recommended that the temporary light be replaced by a permanent tower lighthouse with keepers' cottages at its base. The new light opened on 16 May 1814.[1] This tower was 13 metres (43 ft) tall, and rose 90 metres (300 ft) above sea-level at high water. This proved to be too tall, as the light was often hidden by fog and low-lying clouds.[4][1] Trinity House recommended a new lighthouse lower down right at the point of the Old Head. Construction started on 20 March 1850 and was completed three years later and first shone on 1 October 1853.[1] Between 1855 and 1907 a red sector covered Courtmacsherry Bay. In 1893 a fog signal was established which was maintained until 2011.[1]